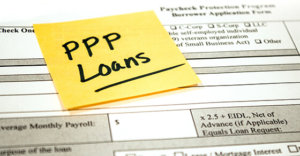 As you may recall, the Small Business Administration (SBA) launched the Paycheck Protection Program (PPP) back in April to help companies reeling from the economic impact of the COVID-19 pandemic. Created under a provision of the Coronavirus Aid, Relief and Economic Security (CARES) Act, the PPP is available to U.S. businesses with fewer than 500 employees.

In its initial incarnation, the PPP offered eligible participants loans determined by eight weeks of previously established average payroll. If the recipient maintained its workforce, up to 100% of the loan was forgivable if the loan proceeds were used to cover payroll expenses, certain employee health care benefits, mortgage interest, rent, utilities and interest on any other existing debt during the “covered period” — that is, for eight weeks after loan origination.

On June 5, the president signed into law the PPP Flexibility Act. The new law makes a variety of important adjustments that ease the rules for borrowers. Highlights include:

Extension of covered period. As mentioned, under the CARES Act and subsequent guidance, the covered period originally ran for eight weeks after loan origination. The PPP Flexibility Act extends this period to the earlier of 24 weeks after the origination date or December 31, 2020.

Adjustment of nonpayroll cost threshold. Previous regulations issued by the U.S. Treasury Department indicated that eligible nonpayroll costs couldn’t exceed 25% of the total forgiveness amount for a borrower to qualify for 100% forgiveness. The PPP Flexibility Act raises this threshold to 40%. (At least 60% of the loan must still be spent on payroll costs.)

Lengthening of period to reestablish workforce. Under the original PPP, borrowers faced a June 30, 2020 deadline to restore full-time employment and salary levels from reductions made between February 15, 2020, and April 26, 2020. Failure to do so would mean a reduction in the forgivable amount. The PPP Flexibility Act extends this deadline to December 31, 2020.

Reassurance of access to payroll tax deferment. The new law reassures borrowers that delayed payment of employer payroll taxes, which is offered under a provision of the CARES Act, is still available to businesses that receive PPP loans. It won’t be considered impermissible double dipping.

Important note: The SBA has announced that, to ensure PPP loans are issued only to eligible borrowers, all loans exceeding $2 million will be subject to an audit. The government may still audit smaller PPP loans, if there is suspicion that funds were misused.

This is just a “quick look” at some of the important aspects of the PPP Flexibility Act. There are many other details involved that could affect your company’s ability to qualify for a PPP loan or to achieve 100% forgiveness. Also, new guidance is being issued regularly and further legislation is possible. We can help you assess your eligibility and navigate the loan application and forgiveness processes.