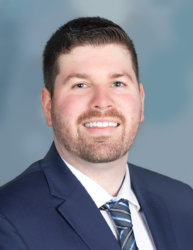 Bryan started as an intern and is now a Staff Accountant in the Audit Department, Buffalo office. He attended Daemen College and is from Clarence, NY.

How did you first learn about EFPR Group?
“I was referred by Christian Archilla.”

What attracted you to the firm?
“I thought that Doug and Rob were very welcoming and had a calm demeanor to them. I have never felt so comfortable at an interview before and it seemed to be a great fit to me. On top of that, they offered me an  internship in the attest department, whereas most other firms were offering tax internships.”

So far what have you enjoyed about working here?
“I have enjoyed the team atmosphere at EFPR Group. Upper management is very accommodating with new staff and all co-workers are willing to help on a job at the drop of a hat. So far, it has been nothing but a positive experience working at EFPR Group. ”

What excites you about the future at EFPR Group?
“They seem to have an established presence in the Buffalo and Rochester area with plenty of clientele. I also think that there is a real possibility for room for growth within the firm as long as the work is put in, which excites me immensely.”